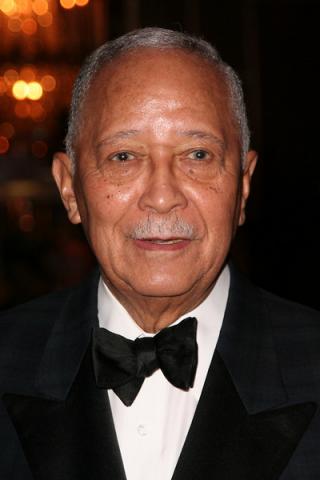 David Dinkins became the first African American to serve as mayor of New York City following his election victory in 1989.   David Dinkins was also a husband, father, author, and professor.

David Norman Dinkins was born on July 10, 1927, in Trenton, New Jersey, to Sally and William Dinkins. His parents separated when he was 6 years old, and Dinkins briefly lived with his mother in the Harlem section of New York City before returning to New Jersey with his dad and stepmother, Lottie.

After graduating from Trenton Central High School, Dinkins attempted to enlist in the U.S. Marine Corps but was rebuffed due to his race. He was finally admitted in the summer of 1945, as one of the groundbreaking African American Montford Point Marines. Although the war ended while he was still in boot camp, he was able to use his service time to attend Howard University on the G.I. Bill.

Dinkins studied mathematics at Howard, where he met his future wife, Joyce Burrows, before graduating cum laude in 1950.  After attended Howard University and Brooklyn Law School, he began his career in New York City politics in the 1960s, ascending to city clerk and Manhattan borough president, before becoming the Big Apple's first African American mayor in 1989. While Dinkins took key steps towards revitalizing the the city's economy and increasing community development, his accomplishments were offset by a recession, rising homicide rates and flaring racial tensions. In 1993, Dinkins lost his bid for reelection he later became a professor at Columbia University.

In 1956, Mr. Dinkins teamed with Thomas Benjamin Dyett and Fritz Alexander to form the law firm of Dyett, Alexander & Dinkins. Additionally, with help from his father-in-law, New York State Assemblyman Daniel L. Burrows, Dinkins became involved in the George Washington Carver Democratic Club of Harlem. He subsequently was elected to the state assembly in 1965, although he served only one term before his district was reapportioned.

In 1972, Dinkins was appointed to the New York Board of Elections, and he became the first African American to serve as its president. His political rise was seemingly halted by his failure to pay taxes for three years, resulting in the withdrawal of an offer to become deputy mayor in 1973. However, he was elected city clerk in 1974 and served in the role for 10 years, until taking over as Manhattan borough president in 1985. His influential teamwork with famed African American politicians Charles Rangel, Percy Sutton, and Basil Patterson was referred to as the “Gang of Four”. 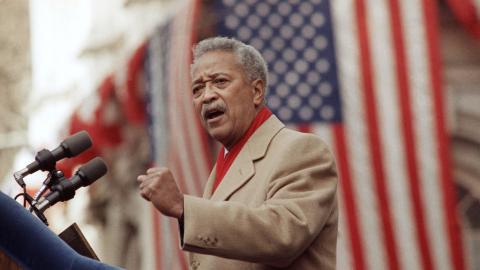 Dinkins struggled to implement many of his plans due to a recession. He did manage to launch the New York City Safe Streets, place more police offers on the streets through Safe City Program and fostered increased community involvement through the Beacon Initiative. Additionally, he signed key development deals to revitalize the the city's economy: with Disney, which led to the renovation of Time Square, and with the United States Tennis Association, which kept the U.S. Open in Queens.

Dinkins presided over a city well known for its municipal crises.  His term, however, was particularly turbulent because an unprecedented crack epidemic and the resulting drug wars that swept through the city.  Especially affected were the impoverished African American and Puerto Rican neighborhoods that formed the core of Dinkins’s constituency. The crack epidemic also spawned a crime wave that exacerbated racial tensions.

Two episodes particularly tested the mayor’s ability to be an effective municipal leader. In 1989, shortly after Dinkins took office, a young white woman was allegedly raped and brutalized by marauding black youth in Central Park.  Months later, a black teenager was murdered when he ventured into a white ethnic Brooklyn neighborhood. In both episodes, Dinkins calmed racial tensions and earned an image as a peacemaker.  Although Dinkins presided over a decrease in crime in the city, balanced the city budget by turning a $1.8 billion dollar deficit into a $200 million surplus, and maintained racial peace after the Rodney King verdict sparked rioting in a number of cities across the nation, he never completely shed his image as an ineffective political leader.

Although the rate of homicide had reached an all time high when he took office, all categories of violent crime declined during David Dinkins’ time as NYC Mayor.  Mayor Dinkins negotiated a fee with the USTA National Tennis Center that generates more money for New York City each year than the Yankees, Mets, Knicks, and Rangers combined.  Other New York City staples events such as Fashion Week, Restaurant Week, and Broadway on Broadway were all created under Mayor Dinkins.  Mayor Dinkins is credited with cleaning up Times Square, and convincing The Disney Corporation to restore an old theater on 42nd Street.  Mayor Dinkins fixed The Civilian Complaint Review Board, which investigates complaints of police officers, so that its control was independent from the NYPD. Mayor Dinkins lowered the homeless population to its lowest point in 20 years. Dinkins restored more housing than next Mayor Giuliani in half the time.  The first 10 Beacon programs, community centers with hours beyond the school day, were established under Mayor David Dinkins.

The 1993 election proved a political rematch of 1989, this time, however, Rudolph Giuliani narrowly defeated David Dinkins for the mayor’s position. So he lost his bid for reelection in 1993. 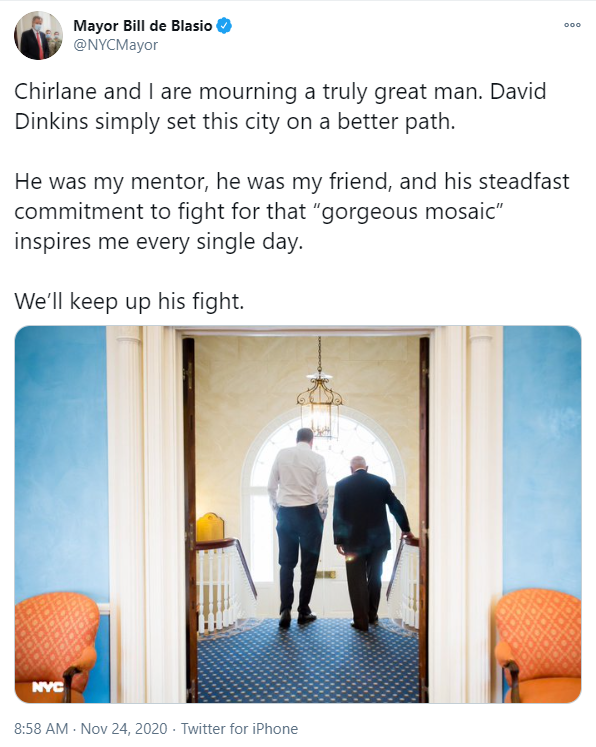 "He simply put us on a better path, and he did it with heart and warmth and love. He was animated by love for people, all people. And David Dinkins believed that we could be better, he believed we could overcome our divisions. He showed us what it was like to be a gentleman, to be a kind person, no matter what was thrown at him, and a lot was thrown at him. And he always tried to answer the hate would love. It was remarkable serving with him in this building, to see that no matter what was going on out there, he always had that joy that he found, and it was particularly for children. He loved children so deeply, and he did something about it, creating those amazing Beacon afterschool programs that continued to stay, that we've actually been expanding to reach more and more kids. This is something he believed in so deeply, everything that we could do for our child. And he had a wisdom, an ability to stay steady, no matter how choppy the waters, it was just extraordinary.   And it's hard to be that patient and that kind when there's so many troubles all around you, but he did it. And he made things happen for this city that he's really never gotten the credit for, including putting us on the pathway to becoming a much safer city with the Safe Streets, Safe City program, and all the affordable housing that he launched and the generation of really devoted public servants that got their start. And Chirlane and I are humbly among that generation that we would never have had the opportunity to serve our city if it weren't for David Dinkins." 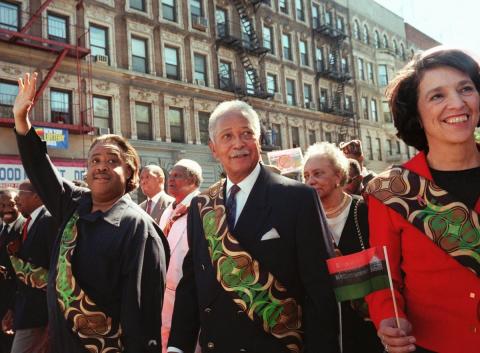 Dinkins served as a board member of numerous organizations, including New York City Global Partners, the Children’s Health Fund and the USTA. In 2012, he received a Congressional Gold Medal for his service with the Montford Point Marines, and the following year he published a memoir, A Mayor’s Life: Governing New York's Gorgeous Mosaic.

In 2015, Dinkins was honored for his decades of public service when one of lower Manhattan’s architectural landmarks was renamed the David N. Dinkins Municipal Building.
Dinkins is a founding member of the Black & Puerto Rican Legislative Caucus of New York State, the Council of Black Elected Democrats of New York State, and The One Hundred Black Men. He was also vice president of the United States Conference of Mayors, and is a member-at-large of the Black Leadership Forum.

Many of New York’s top luminaries from both sides of the political aisle hailed Dinkins as a devoted public servant and trailblazer who paved the way for other Black politicians.

He also wrote a book, A Mayor's Life by David N. Dinkins.

“David was a historic mayor. He showed that a Black candidate can win biracial support in a citywide race,” said former New York Gov. David Paterson, who was the first African-American governor, according to the New York Post.

“David Dinkins was a forerunner to Barack Obama. He was elected saying the same things,” Rev. Al Sharpton wrote on Twitter. “He helped to change the psychology of American politics, making it more inclusive and more progressive.”  In another Tweet he said, "A gentle warrior has passed to the other side, the first & only Black Mayor of NYC, David Dinkins. A kind but tough man who stood for what he believed in without offending others unnecessarily. I knew him since I was a teen, he was the lawyer that incorporated my Youth group." 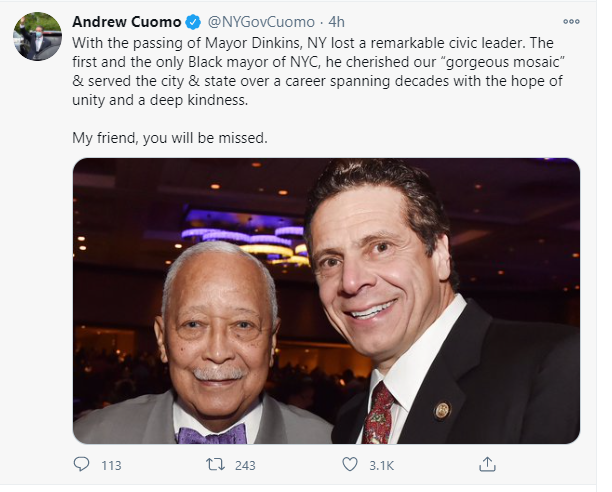 And you want to talk about pioneers and groundbreakers, when he ran for mayor, you know, this was really such a step forward. David Dinkins, Percy Sutton, Basil Patterson, Charlie Rangel, they were really barrier breakers extraordinaire when they were doing it. They were cutting the brush and forging a path for so many to follow. But they went first, and the first person down the path, you catch all the briars, and all the scrapes, and when Mayor Dinkins was mayor, the city really had issues.

But we're all going to miss him. And he was really a New York champion and a beautiful New Yorker, and a mentor to me and a mentor to so many of us. So God bless David Dinkins. 2020 was a bad year, my friends. We're going to look forward to a new year." 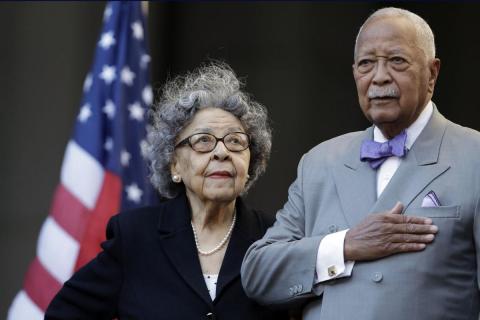 Dinkins was a member of Alpha Phi Alpha and Sigma Pi Phi, the oldest collegiate and first professional Greek-letter fraternities, respectively, established for African Americans. He was raised as a Master Mason in King David Lodge No. 15.

On Twitter it was announced that a memorial service will be held for Mayor David Dinkins after the Covid-19 crisis ends. In lieu of flowers, consider donations:

The Schomburg Center for Research and Black Culture

“I stand before you today as the elected leader of the greatest city of a great nation, to which my ancestors were brought, chained and whipped in the hold of a slave ship.  I intend to be the mayor of all the people of New York. This administration will never lead by dividing, by setting some of us against the rest of us or by favoring one group over others,”