Juneteenth is the day in 1865 when slaves in Texas learned they were free, marking the official end of slavery in the U.S.  Juneteenth is the oldest nationally celebrated commemoration of the ending of slavery in the United States.  Dating back to 1865, it was on June 19th that the Union soldiers, led by Major General Gordon Granger, landed at Galveston, Texas with news that the war had ended and that the enslaved were now free. Note that this was two and a half years after President Lincoln’s Emancipation Proclamation - which had become official January 1, 1863. The Emancipation Proclamation had little impact on the Texans due to the minimal number of Union troops to enforce the new Executive Order. However, with the surrender of General Lee in April of 1865, and the arrival of General Granger’s regiment, the forces were finally strong enough to influence and overcome the resistance 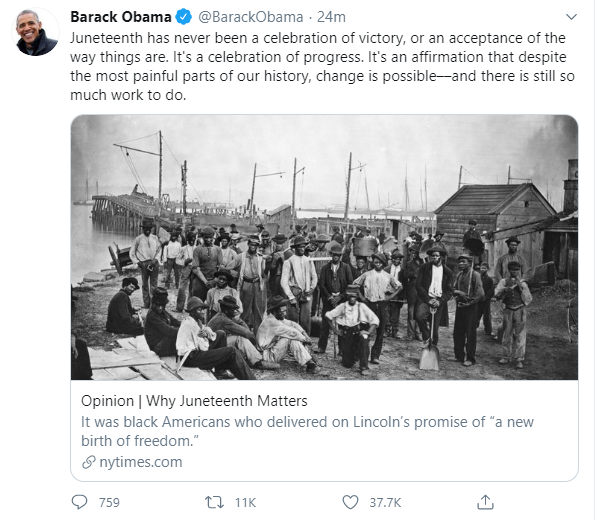 President Abraham Lincoln signed the Emancipation Proclamation freeing slaves on Jan. 1, 1863.   In 1790, one in three blacks in New York state were free.  In New York City, there were 'independent' black communities, with churches, organizations and businesses.

Although there was movement towards abolition of slavery, the legislature took steps to characterize indentured servitude for blacks in a way that redefined slavery in the state. Slavery was important economically, both in New York City and in agricultural areas, such as Brooklyn. In 1799, the legislature passed the Act for the Gradual Abolition of Slavery. It freed no living slave. It declared children of slaves born after July 4, 1799, to be legally free, but the children had to serve an extended period of indentured servitude: to the age of 28 for males and to 25 for females. Slaves born before that date were redefined as indentured servants and could not be sold, but they had to continue their unpaid labor.  From 1800 to 1827, white and black abolitionists worked to end slavery and attain full citizenship in New York.

The Racial Justice and Reconciliation Commission

Racial injustices are manifested in a myriad of ways, from notorious episodes of racial violence to less visible policies and practices that reinforce racial segregation and impact the health and economic opportunity of New Yorkers.

Today, Mayor Bill de Blasio announced additional steps the City is taking to address disparities and structural racism that have been exposed by the COVID-19 pandemic. As part of that effort, the City will commemorate Juneteenth, a holiday celebrating the emancipation of enslaved Africans, with a new commission to understand the effects of structural and institutional racism in New York City. The Racial Justice and Reconciliation Commission (RRC) will be established to promote social learning, collective introspection, and policy action. In addition, the Commission will create a historical record of racial discrimination, with an emphasis on housing, criminal justice, environmental racism and public health. The RRC will examine how these forces shaped the physical and social geography of the city and provide a platform for New Yorkers to share their personal experiences and to participate in policy deliberations. The City will work with the Commission to identify and examine focus areas where discrimination has manifested, including housing, criminal justice, environmental justice, education and place-based disparities.

The Racial Justice and Reconciliation Commission (RRC) will be established to promote social learning, collective introspection, and policy action. In addition, the Commission will create a historical record of racial discrimination, with an emphasis on housing, criminal justice, environmental racism and public health.

“Racism has been a pervasive and consequential force throughout the city’s history and we cannot go back to the status quo. We must use the past to inform and inspire the present, to promote the dignity and well-being of all New Yorkers, and their full inclusion in the life of our city.” said Mayor Bill de Blasio.

"Communities of color experience the painful cost of being black or brown every day, and confronting this legacy of systemic racism requires that we confront history,” said First Lady Chirlane McCray. “Reconciliation is not an alternative to justice, but it is necessary to build trust and create a stronger, fairer City for generations to come.”

Friday’s Juneteeth celebrations will be a holiday for New York city and state employees too, marking a pivotal shift of the day that celebrates the liberation of enslaved Black people in the United States.

Governor Andrew M. Cuomo issued an Executive Order this week recognizing Juneteenth as a holiday for state employees, in recognition of the official emancipation of African Americans throughout the United States. The Governor will also advance legislation to make Juneteenth an official state holiday next year.

"Friday is Juneteenth - a day to commemorate the end of slavery in the United States - and it's a day that is especially relevant in this moment in history," Governor Cuomo said. "Although slavery ended over 150 years ago, there has still been rampant, systemic discrimination and injustice in this state and this nation, and we have been working to enact real reforms to address these inequalities. I am going to issue an Executive Order recognizing Juneteenth as a holiday for state employees and I'll propose legislation next year to make it an official state holiday so New Yorkers can use this day to reflect on all the changes we still need to make to create a more fair, just and equal society."

Mayor de Blasio announced the move today and said the city will be working with labor unions to finalize the plans.  “Every city worker, every student will have an opportunity to reflect on the meaning of our history and the truth and to think about the work we have to do ahead,” de Blasio said at a his Friday morning press briefing. “One thing that is profoundly clear in the history of African people in this county is that through the pain and struggle came an extraordinary purposefulness and vision.”

Juneteenth was normally observed by African American communities with gatherings, small parades or a festival, but as calls for racial justice sparked by the death of George Floyd continue to grow, it will now also be a day of action. Thousands of New Yorkers are expected to take to the street to demonstrate that there's a long way to go for racial equality in the country.

One of the rallies in the city will be held at the Brooklyn Public Library.  "Although slavery ended over 150 years ago, there has still been rampant, systemic discrimination and injustice in this state and this nation, and we have been working to enact real reforms to address these inequalities," Cuomo said.

Here is a list of some of the events taking place today in Manhattan.

The Department of Education has shared lessons, discussion guides, readings, and other age-appropriate instructional materials for educators to teach lessons about Juneteenth. The DOE is encouraging teachers to use them today, but also in coming days to help students understand the American history of enslaving Africans, race, and racism in our culture. The Mayor is also making Juneteenth an official City and school holiday.

During his daily briefing Friday, the mayor says five more streets around the city will be getting Black Lives Matter murals like the one that was painted in Brooklyn last weekend. The streets getting the murals are Centre Street in Manhattan, Richmond Terrace on Staten Island, Joralemon Street in Brooklyn, 153rd Street in Queens, and Morris Avenue in the Bronx.

The street murals we be at the following locations, to be completed in the next few weeks:

Manhattan: Centre Street between Worth Street and Reade Street