Responding to pressure from state lawmakers, New York City and New York state released racial data on COVID-19 patients. This Preliminary data released by the New York City on Wednesday revealed that Latino and black New Yorkers are dying from the new coronavirus at higher rates than non-Latino whites and Asian Americans.

Commissioner Oxiris Barbot, NYC Health Commissioner had this to say,  "I'm very concerned when I see the large percentage of Latinos who have died of #COVID19. The overlay of anti-immigrant rhetoric in this country, on top of inequities in rates of chronic illness, has real implications on the health of our community and is contributing to this outcome."

NYC Mayor Bill de Blasio said, "We are going to double down on the strategies that reach people who are the most vulnerable now because we are seeing these very troubling facts."  He acknowledged that the virus disproportionately hurts communities that are low-income and have health disparities.

According to a map (below) released by the Department of Health, higher-poverty areas in outer boroughs, where many front-line workers live, are experiencing higher rates of infection than wealthier areas where more residents are able to work from home.

"It's painful, we have to confront it. And it says a lot." Mark Levine had the same sentiments when he was interviewed for "Represent NYC" about the breakdown of the map (below) that shows the total count of COVID-19 cases based on patient address and by ZIP code in New York City. "...along with this racial breakdown, this data it tells a stark story of inequality. Coronavirus is hitting low-income communities of color extraordinarily hard."

“Protect the people who need the most protection," Public Advocate Jumaane Williams wrote in an open letter to the mayor, “Tracking and publishing this data is critical to facilitating the allocation and distribution of resources to the areas most in need.”  He went on to say that, New Yorkers of more color are disproportionately on the front lines
of this pandemic and therefore run a higher risk of exposure to COVID-19. "People of more color
are over represented in essential occupations including grocery store workers, laundromat workers,
healthcare workers, and emergency responders." 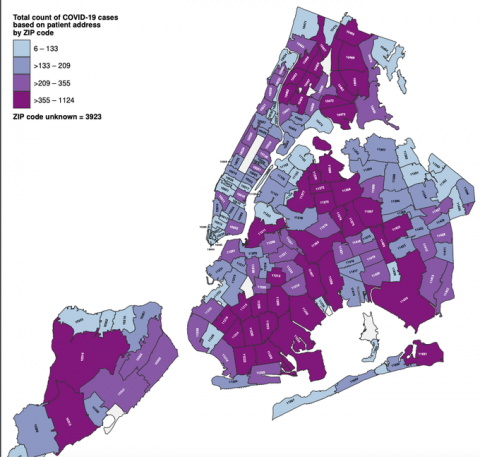