Nearly eight miles of the new open streets will be placed in neighborhoods in every borough and managed by local precincts; 1.35 miles, in three boroughs, will be managed by Business Improvement Districts (BIDs) and community organizations; and another 2.83 miles will be adjacent to parks.

The nine new miles of bike corridors will be phased in over several weeks using barrels, signage, and other barriers, with a goal of creating critical connectors from already-established protected lanes.

“Now that warmer weather has arrived, New Yorkers will need more options to enjoy the outdoors at a safe, social distance,” said Mayor de Blasio. “We’re grateful to all our local partners, and we believe new bike lanes will lay the groundwork for a cycling surge in the months and years to come.”

Mayor Bill de Blasio announced last week that two more miles of streets will be opened to pedestrians and cyclists, adding to the seven miles of car-free streets opened ahead of schedule last weekend. Starting tomorrow, May 7, over 1.5 miles of streets in three boroughs will be managed by Business Improvement Districts (BIDs) as part of the Open Streets initiative designed to provide greater social distancing among New Yorkers. Open Streets will also return to 34th Avenue in Jackson Heights, Queens, which had been part of a pilot last month.

“As the weather gets warmer, New Yorkers will need options to safely enjoy the sunshine– and we’re excited to give them even more options to do so,” said Mayor de Blasio. “We thank our partners at local BIDs, which play an essential role in making commercial areas safe places to social distance. We want New Yorkers to enjoy these streets and continue all best practices to stay safe from COVID-19.”

Under Open Streets, pedestrians and cyclists can use the roadbed of the street. No through traffic is permitted, with remaining vehicle traffic limited to local deliveries, pick-ups/drop-offs, necessary city service, utility, and emergency vehicles only. Such drivers are alerted to be hyper-vigilant and to drive at 5 MPH along these routes. 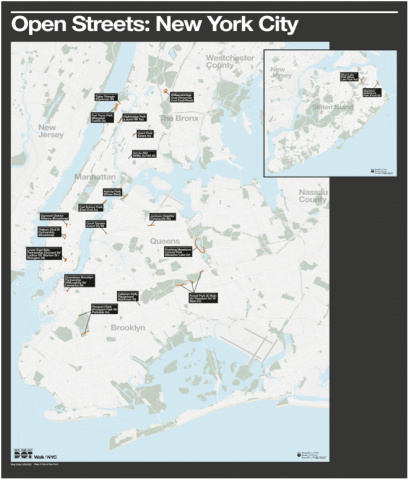 Last week, the Mayor and the Council announced that 40 miles of streets citywide would be opened during May to allow greater social distancing, with a plan to expand to a total of 100 miles to be identified in the weeks and months ahead. The hours of operation for these streets vary.

The new 1.9 miles launching Thursday are:

“Having access to more open streets gives pedestrians the opportunity to be socially distant from each other while enjoying the outdoors as the weather improves,” said Manhattan Borough President Gale A. Brewer. “I thank the Mayor and Commissioner Trottenberg for embracing our call, together with my colleagues in the City Council, to rely on local neighborhood groups, such as Business Improvement Districts, to help expand pedestrian space for New Yorkers. I look forward to further announcements of additional expansions, including hopefully the rest of the portion of Broadway between Times Square and Chinatown that I initially called for."

“As the city continues to expand open space in our streets, help from dedicated community groups quickens the process and ensures safety,” said Council Member Keith Powers. “I thank the Garment District Alliance for their partnership and DOT for its continued work on this initiative.”

Organizations wishing to have other New York City streets considered for the Open Streets program should reach out to openstreets@dot.nyc.gov or fill out an online survey.

"I want to thank Mayor de Blasio, Commissioner Trottenberg and DOT for taking the next step in our open streets plan and working with community partners – in this case our local BIDS – to open these new streets, including in my District on Broadway with the Flatiron/23rd Street Partnership," said Councilwoman Carlina Rivera. "I encourage more community groups to submit proposals to DOT so we can rapidly open even more streets across the Five Boroughs, particularly in communities that lack open space."