NYC Mayor Bill de Blasio has has expressed mounting concern over the city's daily COVID!9 caseload, which topped 600 three days last week for the first time in months and ended last week with a report of more than 700 new cases. On Monday, that shot up to 779, well above the mayor's 550-case threshold. By Tuesday, it was 795.  On Thursday 1,732 new cases were reported in New York City. 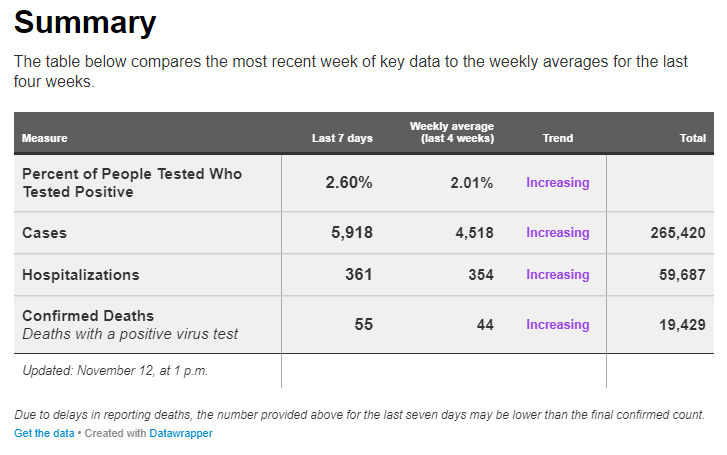 It comes amid a national surge that has seen the U.S. shatter its own daily case records nine times since Oct. 22, most recently on Thursday; Gov. Andrew Cuomo says the next months will be rough

New York City is seeing its highest daily case averages since late May; the rolling positivity rate is up to 2.31 percent. If it hits 3 percent, public schools would switch all remote

“If we do the work possible for all of us to do, we can turn this back, but this is a warning sign if ever I’ve seen one that we have some work to do quickly to make sure the city stays safe and we do not have that second wave,” he said.

If the city's rolling positivity rate hits 3 percent, all schools would switch remote for a period of time; if it keeps climbing, Mayor de Blasio said new restrictions -- from limited hours to full-scale closures -- could come next.

City health officials report that the COVID-19 positivity level in the city has been higher in recent days and this week, Mayor Bill de Blasio reported that the seven-day average is 2.31%, which is inching closer to the 5% threshold that would shut the city down. The mayor said there’s still time to push back on a second COVID-19 wave in the city.   With a COVID-19 positivity rate nearing the threshold for closing New York City Public Schools, Mayor Bill de Blasio said he's ready to make the call and switch to an all-remote learning environment.

On the state level, Gov. Andrew Cuomo says New York has the third-lowest positivity rate in the nation behind Maine and Vermont. However, the state continues to see an increase in both new positive cases and hospital admissions.  And Cuomo has put restrictions in place that start tomorrow.  Read more here.

“While we may be tired of COVID, it is not tired of us,” Cuomo said. “It’s clear that COVID fatigue and a lack of compliance leads to viral spread, so it’s more important than ever that as we prepare for winter, each of us stays smart and New York Tough by taking simple everyday actions like washing hands, wearing masks and socially distancing. Likewise, local governments need to be vigilant and actively enforce public health law throughout the state.”

Meanwhile, pharmaceutical company Pfizer announced this week that its COVID-19 vaccine is 90% effective. The company plans to apply for emergency-use approval from the Food and Drug Administration.

The vaccine would be distributed in five phases, with healthcare workers receiving it first and healthy adults and children receiving it in the last phase. Health officials predict if all goes well the vaccine could begin distribution in December with everyone receiving it by April 2021. Read more about the vaccine here.

New York City is a "few weeks" away from securing a 90-day stockpile of medical personal protective equipment (PPE) and ventilators, according to Mayor Bill de Blasio’s administration, a project the mayor announced in April as part of a vow to be better prepared for a potential second wave of COVID-19 and other emergencies. But some elected officials and the New York nurses union are questioning the formula behind the 90-day supply benchmarks and whether the stockpile will be adequate for hospitals in the event the current uptick in cases and hospitalizations gains enough momentum to approach crisis levels.

De Blasio said the stockpile, known as the "NYC Strategic Reserve," would be ready by the end of the year and should be able to support public and private health-care facilities citywide for a three-month period based on the city's PPE usage at the height of the pandemic -- a time when hospitals were overrun and doctors, nurses, and support staff were forced to reuse disposable gear for days. According to the mayor’s office, the city is close to amassing thousands of ventilators and hundreds of millions of units of PPE, including 13.5 million N95 masks, 185 million nitrile gloves, gowns, face shields, and dozens of other categories of gear.

"We'll purchase what we need and create a stockpile so we will never be in a situation where we turn to those who are supposed to supply this and they say, sorry, we're all out," de Blasio said in April when he made the announcement.

"At the Mayor’s direction, we established a Medical PPE Service Center that could supply the New York City healthcare sector with peak volumes of PPE from the Spring for a full 90 days and meet any ventilation needs we might have," wrote Avery Cohen, a spokesperson for de Blasio, in an email at the end of October.

As part of the Strategic Reserve plan, de Blasio promised to acquire 4,000 ventilators, to be stored and regularly serviced until needed. "We are building up our City-owned ventilator fleet, in combination with resources at hospitals and ongoing support from the Strategic National Stockpile," wrote Cohen, who would not say whether 4,000 was still the goal, or if the maintenance program was underway.